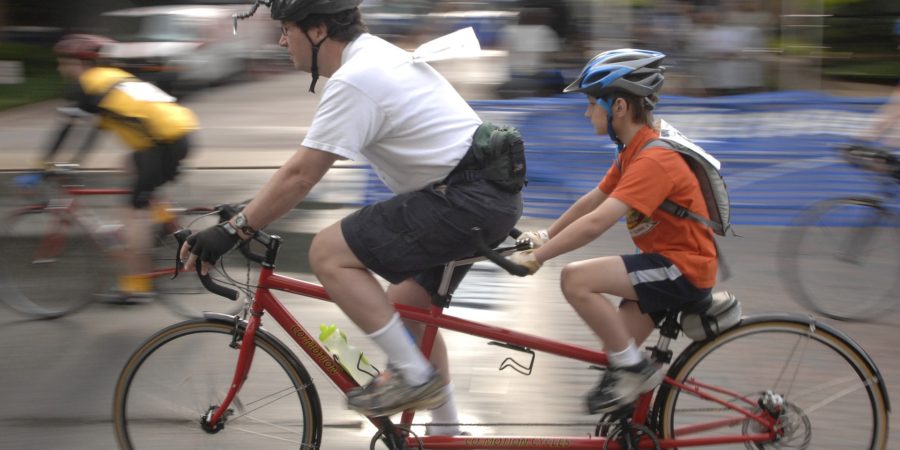 A tandem electric bike is pretty sweet. If I do say so myself.

There’s nothing cooler than zipping through the trees on a nature path with your friend in tow.

Not only can you… “delegate” the work when you’re lazy or tired like a normal tandem bike. Now you can mash the throttle and nobody has to do any work anymore!

I don’t know about you, but I’m already sold on a tandem bike. And I just started talking about them!

Now I just need some friends…

I forgot to tell you what a tandem bike even is!

It’s one of these bad boys 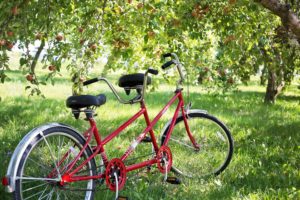 Tandem bikes are just regular old bikes that kind of mutated. So they’re not so regular anymore.

They usually fit two people, hence tandem, and they share two sets of pretty much everything.

But you might be thinking, how on Earth do they pedal together?

Tandem bikes can have multiple setups of how to deliver leg power to ground power.

The most popular of which is the Crossover Rear Drive.

The way this works is that the front chainring has a chain to a rear chainring of the same size. Usually down the left-hand side of the bike. This is called a timing chain.

The right-hand side of the rear crankset has a chainring that goes to the rear wheel to drive it.

Because the left-hand chainrings are the same size, the two riders can pedal at the same interval.

The force of both riders is essentially transferred via the right rear chainring and chain to the rear wheel.

It all just happens in a roundabout (pun intended) way.

Most commonly available tandem bikes require both riders to pedal at the same speed at the same time.

Although there are bike designs such as the da Vinci Drive, that allow independent pedalling between riders (perfect for little kids and parents to ride at the same time!)

Now we know the basics of how a tandem bike works, let’s add in some electricity! 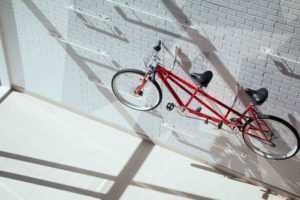 But A Tandem Electric Bike?

There are so many different types of tandem bikes, that there isn’t just one type of tandem electric bike.

Personally, I’d be all about buying a used tandem bike and putting a hub motor on the rear wheel!

However, if you’re looking to make a statement with your bike, you may be considering buying one.

All the way up to the fancier models like a Moustache Tandem that features a mid-drive motor. (This Moustache Tandem has two separate batteries for a combined total of 1000Wh! See here if you’re completely lost on the coolness of that sentence.)

It’s unlikely you’ll be doing any hardcore mountain biking on an electric tandem.

Two people sitting on a bike, combining the power of a single motor (that is usually for a single rider) doesn’t always provide the best results.

However, it is good enough if all you want to do is ride around the block and say hi to your neighbour Sally on the way past!

(I don’t have a neighbour called Sally, and you probably don’t either. But you get the idea!)

If you’re looking to do some hardcore riding, get two separate mountain bikes. Seriously, you’ll thank me later.

Have a look at my guide for how to buy an ebike if that’s how you roll.

Any reputable tandem bike manufacturer will probably suit you well.

A tandem bike (so by extension a tandem electric bike) is not built for mountain biking purposes. Or really anything more involved than a simple ride by the waterfront on a sunny summer afternoon.

If that’s what you’re after – a simple biking experience plus one on the back, grab yourself a tandem electric bike today!

You won’t regret it.

It’ll be as much fun as getting onto an electric bike for the very first time.

One Reply to “Tandem Electric Bike: Two Always Beats One”